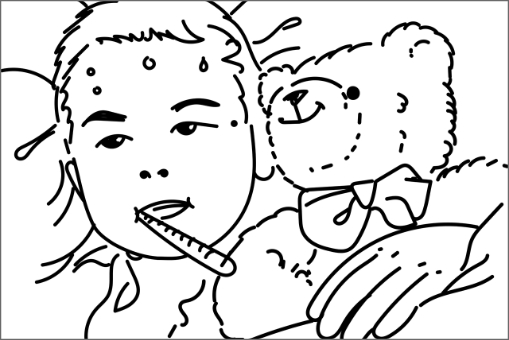 The streptococcus pneumoniae bacterium – also known as pneumococcus – is a common cause of respiratory tract inflammations, accompanied by frequent complications. This widespread causal agent is most common among children who come together in groups. Our own research indicates that the bacterium is found in the nasal mucosa of 40% of children. This is merely a bacterial colonisation that does not cause any severe difficulties: merely a runny nose and coughing. However, its aggressive (invasive) types can cause pneumococcal disease (bacteraemia, meningitis), pneumonia and middle ear infection among children. During the first few hours, clinical manifestations of these invasive forms of the illness can be nonspecific and include a deterioration of the general condition, adynamia, groaning, coughing, vomiting, abdominal pain and capillary bleeding under the skin. Why does the preschool age carry with it specific risks of an increase in the frequency of respiratory tract inflammations?

Firstly, the ability to create antibodies against specific groups of bacteria is reduced. Considering the natural dynamic of the maturation of IgG antibody subtypes, resistance to specific types of bacteria is reduced (IgG2 affects polysaccharide encapsulated bacteria). IgG1 and IgG4 are the first to mature, followed by IgG3 (which reaches adult levels by the age of 10). IgG2 is the last to mature and reaches its maximum level by the age of 12.

Secondly, children join various child groups where they come into contact with their peers, which means they are increasingly exposed to potential causal agents to which they are not completely immune. The exposure is reduced in groups with mixed ages, which means respiratory tract infections are less frequent. Moreover, older children have already adopted hygiene habits, which reduce the possibility of spreading infection through dirty hands, excretion from the nose and mouth, and the use of personal items (glasses, toothbrushes, napkins, handkerchiefs, bed linen).

Numerous studies have identified a link between joining a child group at an early age and the increased frequency of respiratory tract inflammations.1,2 Comparisons of groups of children aged 2 to 5 indicate that risk factors for respiratory tract inflammations are three times higher among children who form part of a group, when compared to stay-at-home children.3-5 The problem is more prominent in urban than rural populations. A study conducted by a group of Swedish authors shows that children who are in traditional kindergartens contract diseases twice as frequently as children who are taken care of in smaller groups (3 to 6 children) in families.4,6

Anyone can contract pneumococcus; especially vulnerable groups include small children, the elderly over 50 years of age and patients suffering from heart, lung and kidney diseases, diabetes, alcoholism or malign diseases. Vaccination against S. pneumoniae can prevent the development of severe forms of the disease that this bacterium causes. Due to the bacterium’s increasing resistance to antibiotic treatments, prevention via immunisation is recommended.

The 23-valent pneumococcal vaccine is well known and requires no special introduction here. It should be noted that the ability to create specific antibodies against membrane polysaccharides is very small among children below 2 years of age (the dynamic of IgG2 maturation). Several years ago, the 13-valent conjugate vaccine appeared on the marked. Aimed against invasive streptococcus pneumoniae serotypes 13 (Prevenar 13 – registered for ages 6 weeks and over) and 10 (Synflorix – for children aged 6 weeks to 5 years), and applicable from the age of six weeks onwards, it provides a high level of protection against invasive forms of this disease (inflammation of the brain and brain membranes, bacteraemia). Unlike its 23-valent counterpart, the 13-valent vaccine also decreases the possibility of the child becoming a carrier. This provides indirect protection for younger siblings who do not form part of a group and have not yet been immunised. Furthermore, unlike conjugate vaccines, the 23-valent polysaccharide vaccine does not reduce the frequency of middle ear infections caused by the pneumococcus. Since previous years have seen a rise in the frequency of resistant traits of the pneumococcus, specific immunisation is becoming increasingly important.

In addition to a reduction of the invasive forms of pneumococcal diseases and middle ear infections, immunisation with a 13-valent vaccine significantly reduces the frequency of pneumonia (especially its severe forms). 7-9

Numerous studies have shown that the additional valence (the difference between the 7- and 13-valent vaccine) is extremely high and reduces the frequency of invasive forms by 70 to 100%.12,13

Pneumococcal isolates serotyping in Croatia has shown that there are no significant differences in the presence of individual types when compared to the US and European countries. Introducing the vaccine into the regular immunisation programme may lead to an estimated 83% (10-valent vaccine) or 90% (13-valent vaccine) decrease in the frequency of invasive pneumococcal disease.14

In our daily work, it is necessary to ensure that patients belonging to groups defined by the Programme exercise their rights and receive adequate protection. Conjugate vaccine immunisation (13-valent conjugate vaccine, the only vaccine registered for use in this age group) is recommended among patients aged 6 to 49 carrying the risk factors described above. Additional 23-valent polysaccharide vaccine immunisation may also be considered (among those over the age of two).

Detailed information on the vaccine along with a description of its characteristics is available on the HALMED (Agency for Medicinal Products and Medicinal Devices of Croatia) and EMA (European Medicines Agency) websites.16