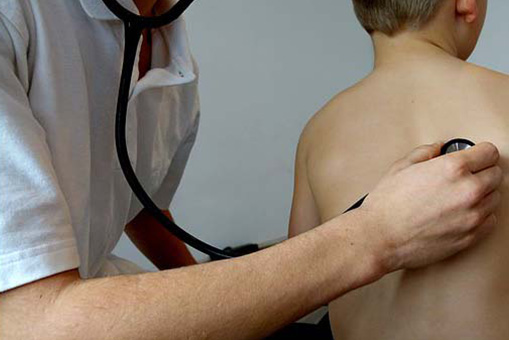 Everyone – children as well as adults – coughs at least a few times a day. Coughing is a widespread phenomenon, especially among preschool children, and attracts considerable attention from parents and medical professionals. A cough is a sudden, explosive exhalation, during which an accelerated air stream carries the contents of the respiratory tract mucosa towards the mouth. It typically occurs as a reflex response to the stimulation of cough receptors, found within the mucosa of the pharynx, larynx, trachea, bronchi and, to a lesser extent, the smaller bronchial branches. Coughing can be stimulated by foreign bodies, dust particles, evaporable chemical agents, changes in temperature and, most commonly in children, an accumulation of secretion created by allergies or inflammation of the respiratory tract mucosa.

Assembling in groups: A common cause of colds and coughs

Around 80% of all visits to the paediatrician are prompted by respiratory tract inflammations and accompanying cough. Around 2/3 of child patients take part in various groups. This is a significant public health concern, both from the perspective of the parents and the healthcare system.

In the course of childhood, the immune system gradually develops, fully maturing around the age of 15. In the first months and years of the child’s life, the body’s ability to defend itself against viral, bacterial and fungi infections is significantly lower. Joining a group (nursery) exposes children to various causal agents, so it can be expected that they will contract an illness two to three times a month (on average). Numerous studies have shown that it is only after three years of attending a nursery/kindergarten that the frequency of contracting acute respiratory tract infections is reduced to the level present among children who do not attend preschool institutions. During the first few months and years of being part of children’s groups, prolonged running of the nose and a flow of secretion into the throat, and further to the trachea and bronchi, occur. The secretion triggers occasional coughing fits featuring an audible “ripping” of the discharge from the mucosa (the so-called moist or productive cough). This type of cough is typically intensified during physical exertion, when the air current sets the secretion accumulated on the bronchial and tracheal mucosa into motion, thus causing stimulation of the cough receptors. Created by a runny nose, a productive cough is more common during the night. Spasmodic coughing which eliminates accumulated secretion typically occurs after the child has gone to sleep. Namely, falling asleep weakens the swallowing reflex so the secretion flowing down from the nose is not swallowed, but ends up in the trachea.

Since the defence mechanisms are still not sufficiently developed, certain viruses (rhinoviruses and RSV – respiratory syncytial virus) cause severe damage to the respiratory tract mucosa. This type of damage can linger for several years after the child has overcome the illness. During the first two years of being part of a children’s group, all children get over an RSV virus infection. In cases like this, the appearance of the infected mucosa is altered and its natural protective mechanisms are significantly weakened, which means future infections will be contracted more easily and their symptoms will be more pronounced. In response to the new infection, the mucosa undergoes a severe swelling, which significantly impedes the air flow in the smallest bronchi branches (a result of the hyperactivity of the mucosa). The resulting obstruction of the lower airway is indicated via stridor (a wheezing sound accompanying exhalation), short and rapid breaths, prolonged exhalation and fits of a suffocating cough which become more severe in the lying position.

Coughing in a lying position

The human body contains large amounts of water which are distributed among the body fluids within and outside the cells. In the upright or sitting position, the fluid pressure is highest in the lowest body parts (the legs). In the lying position, the fluids are shifted towards the upper body parts. This is one of the reasons why elderly people suffering from heart or lung conditions cannot lie down on a flat surface (this immediately causes suffocation and coughing). With children and young people, this shift of fluid causes swelling of the respiratory tract mucosa. With common colds, the nose is completely congested, sinus inflammation is accompanied by pain, while inflammation of the throat mucosa causes difficulties with breathing and stridor, and creates or exacerbates obstructions in the bronchi. If the air is cold and damp, the swelling is less prominent. The swelling of the nasal mucosa obstructs the flow of fresh air into the middle ear. While children are in an upright position, while awake and moving, swallowing and blowing their nose, they manage to push the air through the Eustachian tube from the nose into the middle ear. When the child is asleep, these activities cannot be performed, so the swelling of the nasal mucosa increases in the lying position, which, in turn, almost completely cuts off the air flow. The air used up in situations like this comes from the middle ear, which creates sub-pressure and results in the ear drum being pulled in; this, in turn, causes pain which abruptly wakes up the child.

For children suffering from inflammatory or allergic bronchitis, assuming a horizontal lying position causes bursts of dry cough. Physical exertion increases the pressure of the fluid in the chest, which leads to an even greater swelling of the mucosa in the smallest branches of the bronchi. The smaller the child, the smaller the bronchi branches, which is why the swelling of the mucosa in small children leads to even greater difficulties in breathing and more intense coughing.

When to seek medical assistance?

Coughing that significantly disrupts sleeping or feeding, severe coughing that causes vomiting several times a day, the fatigued appearance of a child who calmly wishes to see a doctor, all suggest that medical assistance is needed. Symptoms of heavy breathing (fast and superficial breathing, prolonged exhalation, wheezing while exhaling) can all point to a more prominent inflammation of the lower airways (bronchi and their branches). Painful coughing (pain behind the chest plate, pain inside the chest or in the pharynx caused by coughing) suggests the possibility of a bacterial infection and the need for treatment with antibiotics. Hoarse coughing accompanied by the sound of “grating” (similar to the sound of a seal or the barking of a dog) points towards subglottal laryngitis. Furthermore, medical examination is necessary if, following a prolonged coughing period which does not significantly disturb the child’s overall condition, the child develops a fever – especially a high, shaking fever. Special caution is needed with children under 12 months, especially those younger than 5 to 6 months. In the youngest group, symptoms of severe infections can be scarce (they do not develop a fever) and the insufficiently developed immune system enables the inflammation to spread rapidly. It is therefore important to pay close attention to the child’s general condition: if the child is calm and pale, breathes in a shallow and rapid manner, and refuses food, contact your paediatrician without delay.

How to prevent respiratory tract inflammations

The respiratory tract mucosa has effective mechanisms protecting it from numerous “attackers” (bacteria, viruses, fungi, etc.). The surface of the mucosa is covered in phlegm which contains mucus antibodies which instantaneously destroy potential attackers. The mucosa itself has cilia which use their fluttering to eliminate anything that might get accumulated in the phlegm; the secretion created in this manner is typically coughed or blown out through the nose. Illnesses of the respiratory tract are most frequent in the autumn and winter seasons, when children spend most of their time in closed, heated spaces. Excessive heating dries out the respiratory tract mucosa: the phlegm becomes thickened, there are no antibodies and the cilia become stuck to each other: as a result, the cleaning of the mucosa ceases, leaving it dry and vulnerable. Contact with fresh, cold air creates a reaction in the mucosa which begins to produce secretion at an increased rate (children have runny noses and watery eyes in cold weather), which increases the cleansing effect. Children who spend time in rooms where adults smoke contract respiratory tract inflammations more frequently (e.g. they contract ear infections or bronchitis three times more frequently). Similarly, living in areas with a high degree of air pollution increases the frequency of respiratory tract inflammations.

The need for physical activity

In addition to the previously described problems caused by dry and warm air, being indoors is also linked with a lack of physical activity. Activity (running, working) leads to accelerated breathing, and the air stream becomes considerably faster, allowing for a more rapid cleansing of the respiratory tract. When the child is calmly sitting, air exchange takes up only 1/3 of the lungs, while discharge and stale air (favourable for the development of bacteria) pile up in the remaining parts. Furthermore, physical activity directly contributes to building immunity.

It is extremely important to realise that the majority of respiratory tract inflammations are spread by the hands! According to popular belief, the most dangerous thing one can do is to enter a room inhabited by a diseased person; however, studies have shown that (especially in the case of preschool facilities) hand washing (this applies to both children and caretakers) and the use of paper towels (alternatively, each child should have their own towel) considerably reduces the frequency of illnesses. Children typically spread the secretion accumulated on them through coughing (placing a hand over the mouth while coughing) or wiping their nose, by their hands. Children should be taught to sneeze and cough into their sleeves, thus keeping their hands clean. During the season of colds, toys and play areas should be cleaned more frequently.