How is vitamin D produced? 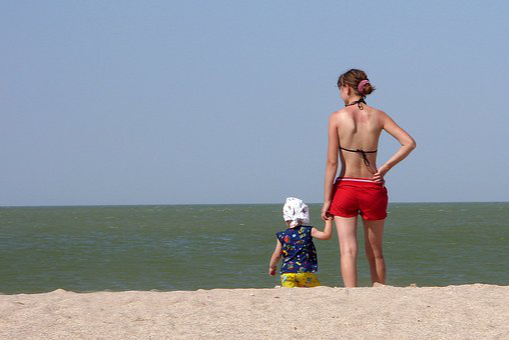 The term vitaminD refers to a group of fat-soluble compounds, the most significant among them being vitamin D2 (ergocalciferol) and vitamin D3 (cholecalciferol), jointly termed calciferol. Vitamin D2 is synthesised by invertebrates, mushrooms and plants, while vitamin D3 is synthesised by vertebrates. Vitamin D created via dermal synthesis from sunlight (exposure to UV-B rays with wavelengths between 270 and 300 nm) or consumed with food and food supplements is biologically inactive. The said UV ray wavelengths occur when the solar index is 3 or more. Synthesis takes place in the deepest layers of the skin. Increased amounts of the pigment melanin (e.g. among people with dark skin) protect the skin from the harmful effects of UV-B rays, but also reduce vitamin D synthesis. As a rule, dark skin is common in parts of the world which are more exposed to the sun, while inhabitants of the northern parts of the globe tend to be light-skinned. In a time of globalisation and migration, many dark-skinned persons live in northern areas and are therefore exposed to an increased risk of vitamin D deficiency. Due to pigment deficiency, light-skinned persons living in areas with ample sun exposure (e.g. in Australia) are in increased danger of melanoma and skin cancer. Numerous other factors affect UV exposure as well. The geographical latitude determines the length of sun exposure, the angle under which the sun rays reach the surface of the Earth and the degree to which they are absorbed in the atmosphere. UV-B exposure also depends on the season, cloud cover, clothing, the time spent outdoors and the use of UV protection products. The amount of UV-B rays in tropical areas is sufficient throughout the year, in areas with a moderate climate during spring and summer, and is almost always insufficient in the Arctic region.

Cultural changes in the wake of the industrial revolution and social developments which enabled people to work indoors and wear more clothing that provides protection from the elements have significantly reduced UV exposure, which, in turn, creates the need for vitamin D supplements. In many countries, everyday food (milk, yoghurt, margarine, oil, pasta and bread) is enriched with vitamin D. Natural sources of this vitamin include fish oil (15 ml contain 1,360 international units (IU)), oily fish (50g of sardine contains 250 IU, and 85g of tuna 200 IU), eggs (20 IU), veal liver and mushrooms.

How does vitaminD work?

Following its dermal synthesis (only after being processed by the kidneys and liver), vitaminD assumes an active form called calcitriol (1.25-dihydroxycholecalciferol). Calcitriol is released into the bloodstream, attaches itself to a specific protein – the vitaminD carrier (vitamin D-binding protein) – and travels to different target organs. In this way, it starts protein synthesis, which enables the transport of calcium from the intestines into the blood. Its absorption into intestine, bone, kidney and parathyroid gland cells maintains the calcium and phosphorus levels in the blood (with the help of parathyroid gland hormones and calcitonin) and in the bones. Vitamin D deficiency reduces the amount of calcium that is resorbed from the intestine into the blood and reduces the amount of calcium that is integrated into the bones. Existing calcium in the bones is needed to enable the entire organism to function, which results in bone softening. Childhood vitaminD deficiency leads to rickets – a condition which causes the bones to become soft and deformed, and results in a series of growth and function disorders. The systematic prevention of rickets by administering vitamin D3 to all infants has made this illness extremely rare.

In addition, vitamin D regulates the activity of a large number of genes in the majority of other organs as well (the brain, heart, skin, sex gland, prostate, breast). In this form, it also participates in the multiplication and differentiation (maturation) of cells and has a significant effect on the immune system (it is found in leukocytes: monocytes, T and B lymphocytes). The possibilities for the therapeutic use of vitamin D among patients with immunological disorders (lupus erythematosus, Type I diabetes, rheumatoid arthritis), skin diseases (psoriasis), cancers (prostate, intestine and breast cancer, leukaemia, brain and neck tumours) and diseases of the central nervous system (multiple sclerosis) are still being investigated.

What are the recommended daily D3 doses?

To prevent rickets, children from 1 to 12 months old should be given the recommended daily dose of 400 to a maximum of 1,000 IU of vitamin D. The recommended daily dose from infancy to the age of 70 is also 400 IU (depending on the source, the maximum amount ranges between 2 and 10,000), but rises to 600 IU after the age of 70. After the first year, prophylaxis is also recommended in the winter months (over the next two winters). An estimated 20 minutes of daily exposure to sunlight is considered to create a sufficient amount of vitamin D3 (but for dark-skinned people, there is a need for daily exposure of between 60 and 120 minutes). Prolonged exposure does not create a risk of excessive amounts of vitamin D since there is a very efficient breakdown of the excess amounts.

The relatively large imbalance between the recommended and maximum daily dosage of vitamin D on the one hand, and its relative scarcity in a balanced diet on the other, means that food supplements such as multivitamin products can be taken without fear of hypervitaminosis.