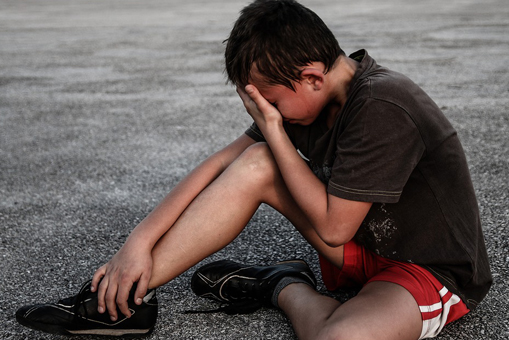 Most children complain of pain in one or both legs at some point. The pain may occur in the evening and at night, sometimes in the morning or during the day. The pain may increase when the child walks, or may gradually lessen after a shorter period of walking. This type of pain typically causes great concern among parents, so we will try to provide an overview of its possible causes. “Growing pains” have a clear biological foundation and mechanisms of appearance.

The most frequent are pains felt along the length of the lower leg in the evening. The child has typically been more physically active during that day than usual. These are pains in the tibial periosteum, which is pervaded by numerous blood vessels and nerve endings. Intense physical exhaustion (playing, jumping) causes stimulation of the nerve ends, which triggers a feeling of pain at the end of the day, usually when the child lies in bed. Paracetamol rapidly helps relieve the pain.

Sometimes, the child complains of pain in the tibia, just below the knee joint. This is the location of a large, strong tendon of the quadriceps femoris. Increased physical activity (jumping, walking uphill or down the stairs, squatting, kneeling) puts a lot of pressure on the tendon attachment, which creates pain which can last for several days. It does not have to appear in both legs – it all depends on the physical activity the child was engaged in. Taking paracetamol or ibuprofen will prove useful in this situation, as will ice therapy (gently caress the painful area with a piece of ice on a stick until the area turns red: usually for 5 to 10 minutes). Problems occur among older children and young people who are very athletic. Training should avoid exercises which place a lot of pressure on the lower leg, such as walking in a squatting position (“the duck walk”), jump squats, squatting while carrying a weight, running downhill, etc.

Similar problems can occur in the attachment of the Achilles tendon to the heel bone. These are typically caused by excessive pressure, inappropriate footwear which can also cause pain and redness by pressing on the heel bone. Usual treatment methods include rest, ibuprofen, ice therapy and inserting pads into the footwear, under the heel.

These are the most common causes of what is commonly known as “growing pains”. Fortunately, painful conditions in the bone/muscle system of the leg are much less frequent; it is nevertheless worth considering their causes and clinical symptoms, which clearly differ from the previously discussed pains and require medical attention.

It is not infrequent for the child to start limping painfully. This usually occurs because of pain caused by hip infections. A medical examination can determine the limited and painful mobility. The child’s temperature should be normal; inflammations occur only as a consequence of a recent infection of the respiratory tract, usually caused by viruses. Sometimes, certain parts of the virus can structurally appear to be part of the joint, which tricks the immune system into making a mistake and causing an inflammation of the joint. The joint then fills up with clear fluid causing the joint capsule to stretch, which makes movement painful. The pain is usually most pronounced after waking up and during the first steps, but later subsides. This inflammation itself subsides within 7 to 14 days and is cured with ibuprofen and rest. In paediatric clinics, we see that this illness (called reactive arthritis) appears seasonally, during epidemics of certain viruses which trigger this type of joint reaction.

Most children and young people, especially when engaged in intense sports activities, complain about pain in the back of the knee – the knee pit. A swelling, relatively painless to the touch, may appear in that spot. This is Baker’s cyst which is created when joint fluid “escapes” from the knee into the back area behind the knee joint. It is more common in adults and is generally caused by changes in the joint surface or ligaments of the knee joint. It is healed by resting, physical therapy, sometimes even surgery. The same group (athletic older children and young people) can experience pain below the knee. This is usually a sign that the cartilage – no longer smooth – has been damaged and causes inflammation and pain due to friction. The damage is caused by excessive strain on the knee joint (squats and previously described activities or blows caused by falling on the knee). Treatment consists of resting the knee joint and physical therapy, although some cases require surgery.

Generally speaking, with very tall children and young people, a lot of attention should be given to preparing appropriate training; avoid muscle exercises that place most stress on the ligaments of the knee joints, and focus more on exercises that strengthen the muscles of the upper leg.

Aseptic necrosis of the joint cartilage

For some unknown reasons, microcirculation in the cartilage may be interrupted which causes the cartilage to waste away. This is accompanied by pain, inflammations and deterioration of the joint areas (damaged inflicted on the bony parts of the joint). With children, this usually occurs in the joints of the lower extremities, sometimes a small joint between the tiny bones in the foot, sometimes in the hip. It usually takes some time for mobility-induced pain to occur: the painful sensation is absent when walking commences, but does appear later, often accompanied by limping. Treatment is long and includes total rest of the infected joint for weeks or months.

Finally, if the child continuously complains of pain in the same spot (e.g. points to a single painful area on the lower or upper part of the leg), contact your physician to eliminate the possibility of cysts or tumours of the bone.