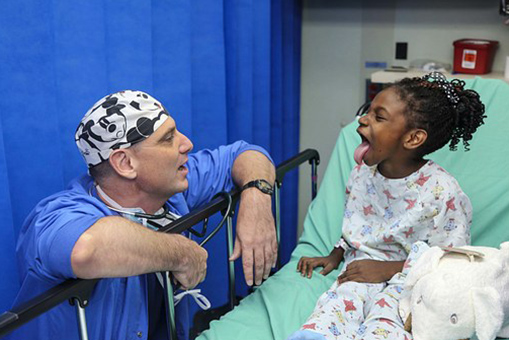 Purulent tonsillitis or tonsil inflammation (tonsillitis) is caused by a bacterium called group A beta-hemolytic streptococcus. It is transmitted via respiratory droplets, dirty hands or shared objects children use or play with. The first symptoms appear after the incubation period (1 – 3 days) and include headache, fever, nausea and general malaise. Stomach pain may also occur. Swollen tonsils are visible in the throat and soon become covered in white streaks of pus. The entire throat is dark red, with spots of blood sometimes visible on the palate. The tongue also becomes red and its papillae enlarged, making it look like a raspberry (raspberry tongue). The lymph nodes in the neck become enlarged and painful.

The beta-hemolytic streptococcus produces several poisons (toxins) which cause debility and nausea. Some of the toxins cause redness of the skin and a characteristic fine-grained rash, most pronounced in areas where the skin is exposed to increased pressure (the armpits, the inside of the upper arm, areas covered by underwear and especially the backside). Sometimes, mild pain and the swelling of individual joints as well as the peeling of the skin on the palms and soles of the feet may occur at a later stage. The cheeks become red, while the area around the mouth is pale. All of this indicates that the patient is suffering from scarlet fever, a streptococcal inflammation of the pharynx, manifested on the skin. In adults, skin manifestations are absent.

Streptococcal infection is treated with antibiotics and leaves no lasting immunity, which means it is possible to contract it multiple times. The patient usually becomes noncontagious within the first two days of the treatment.

In popular perception, there is still a significant degree of fear of streptococcal anginas as they often have a severe consequence: rheumatic fever. Namely, the streptococcus interferes with the immune system whose primary task is to identify and preserve what belongs to the body, and identify and eliminate all that is foreign to it. Due to a malfunction caused by the streptococcal infection, the immune system begins to identify parts of its own body as foreign and begins to attack them (joints, the heart muscle and valves, skin, kidneys and the nervous system). This is why it used to be common practice to do blood and urine tests as well as electrocardiograms (ECG) for each case of infection. However, this practice has been abandoned in recent decades as the said complication has become extremely rare. The reason for this may be that the bacterium itself has changed and now no longer interferes with the functioning of the immune system. Furthermore, it seems that the streptococcal infections take longer to create the interference, and treatment nowadays begins almost as soon as the illness occurs.

People often forget to change their toothbrush: this should be done after five days of antibiotic therapy. Otherwise, the toothbrush may cause the infection to reappear after the treatment has ended. Furthermore, pacifiers, bottle teats and bottles should be boiled, and toys thoroughly washed and disinfected with an appropriate solution.

Sometimes the group A beta-hemolytic streptococcus (also known as streptococcus pyogenes) can be isolated in a throat swab, with no discernible symptoms of illness. This indicates that the host is not endangered or contagious but merely a carrier, which means the child can attend infant nursery/kindergarten. Attempts to treat carriers with antibiotics are not justified and they usually remain ineffective.

The beta-hemolytic streptococcus is often confused with streptococcus pneumoniae or pneumococcus. This bacterium does not cause tonsillitis and is commonly found in the noses of preschool children, especially those attending infant nurseries or kindergarten. It causes a long-lasting, milky-white, mucus-like nasal discharge (when appearing in isolation, it is a symptom of bacterial colonisation of the upper airways). This case does not merit treatment by antibiotics; it is sufficient to frequently clean the nose with a physiological solution. Some types of this bacterium can be very aggressive. They easily penetrate through the respiratory tract mucosa, causing severe infections (inflammation of the brain membranes, sepsis, purulent ear infections or purulent pneumonia). Immunisation provides effective protection against this type of bacterium. Unfortunately, it quickly and easily develops resistance to antibiotics so it is important to follow the prescribed medical procedure. Antibiotic drops which may be administered into the nose are ineffective (the nasal cavity is a complex labyrinth, so antibiotics administered in this manner cannot evenly reach all its parts) which creates ideal conditions for the bacterium to develop resistance to antibiotics (bacteria come into contact with the antibiotics and survive).

Recently, there has been an unusual rise in the frequency of group A beta-hemolytic streptococcus infections. The phenomenon has been identified in the majority of European countries: in some regions, the frequency is five times greater than usual, which is a record level for the past 50 years. Unfortunately, the causes of this phenomenon remain unknown. Most recent laboratory reports on the bacteria have not identified any changes in their structure or level of contagiousness, so other (external?) factors that may enable the spread of the infection are being examined. Prevention (increased hygiene) is key in situations like this, along with regular reports on streptococcal infections and cooperation with epidemiologists working to fight epidemics in kindergartens and schools.