A commonly held belief is that we are fully formed at birth and need only food and time to grow and become adults. However, hidden from parental eyes, fascinating processes of continued birth and maturation take place. Perhaps the most mysterious and significant among these are events taking place in the infant brain from birth until adulthood.

What happens to brain cells during the first years of life?

During prenatal development, brain cells grow at a fascinating rate of around 250,000 cells per minute. By the middle of the pregnancy, billions of brain cells (neurons) have been created. At birth, the brain has reached 70% of the size and 25% of the weight of the adult brain. In the period that follows, new brain cells (neurons) are created and travel to their final destinations. Influenced by external stimuli, brain cells create bonds between each other (synapses), which facilitate their communication. The largest part of the subsequent increase in brain weight is the result of the creation of synaptic bonds between neurons and an increase in the number of supporting (glial) cells. Synaptic bonds help create a network of brain cells and enable signals to be transmitted between them.

The brain cells themselves gradually mature as their appearance and function changes. A typical neuron consists of the cell body, dendrites and the axon (Figure 1). 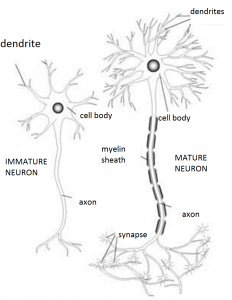 As in any other living cell, the cell body of the neuron is responsible for biological functions. It consists of a nucleus which contains DNA and enables gene expression which helps the neuron to achieve its function: processing information. Dendrites and axons are a continuation of the cell body; they are very thin when compared to the cell body and serve to collect (dendrite) and transmit (axon) information. Dendrites and axons enable brain cells to create a large network we call the brain or, even more generally, the nervous system. Neurons communicate with each other by transmitting electro-chemical signals.

Branches used for communication become more and more developed; the long end (axon) which transmits impulses from one brain cell to another obtains a sheath which accelerates the transmission of impulses. With time, the network used to transmit information from one part of the brain to another grows richer and transmission becomes faster.

In the process of development, neurons respond to external stimulation by creating (branching) neuron bonds. Threads (dendrites) which connect the neurons create complex nerve paths. If the brain cell is continuously exposed to the same type of stimulus, these bonds grow thicker. The unique way in which each mother cares for and raises her infant most likely determines the differences between us, the way we think, communicate and act. In addition to the mother, the father and other individuals who are in regular contact with the infant leave permanent traces on their personalities. Think for a moment how much kindergarten caregivers mean to children who go on to remember them long into adulthood.

In the absence of stimuli, the bonds become thinner and soon disappear (“waste away”). The final result is a thick network of neural pathways created through physiological processes triggered by stimulation and learning. The increase in brain size and weight is a predictable neurophysiological result of the stimulating effects of the environment on their development.

Experiences the child is exposed to present a stimulus which triggers activities between dendrites and axons, creating links (bonds). As the child further develops, the synapses become more complex, like a young tree growing new branches. After the third year, synaptogenesis decelerates and continues at a decreased rate until around the age of 10. From birth until the age of 3, the brain will contain more synapses than it will need in adulthood. The synaptic bonds and pathways the brain frequently uses will be maintained and become stronger, while those that are not used will disappear forever. At the age of 3, the brain has twice as many bonds between the 100 billion neurons found in the cortex, compared to the adult brain (Image 2).

Figure 2. Increase, then decrease, in the number of synapses 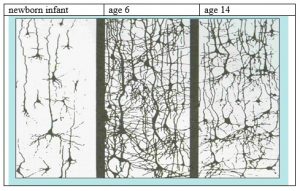 The brain has the ability to change its physical, chemical and structural traits in response to external stimuli, which means that the architecture of each human brain changes under the influence of all newly acquired skills and knowledge. To help the child become successful, it is important to secure numerous positive social occasions and learning opportunities, so synapses stimulated in these processes can become permanent.

The most significant finding is that these processes are shaped not only by hereditary factors (heritage determines the brain’s growth and development potential), but also by equally important external factors, such as love, care, exercise, child rearing and education. Their interaction shapes the final appearance (architecture) and brain function; without external factors, the normal growth and development of brain structures and their functions would not be possible.

In infancy and early childhood, stress can interfere with the development of the brain cell network. Heightened levels of the main signal transmitters (chemical substances, so-called messengers) which appear in reaction to stress may inhibit the process of synaptogenesis. Chronic stress can create negative patterns of thinking and feeling which may become permanent and last for the rest of a person’s life. Separation from parents is one of the biggest sources of stress in the first years because it generates the feeling that one’s very existence is in danger, that one is utterly helpless and unprotected!

Recent epidemiological studies show that stress in infancy can contribute to the development of numerous problems: psychological (from autism to depression), cardiovascular, family violence, alcohol and drug addiction. Exposure to stress at an early age significantly increases the frequency of these illnesses!

A harmonious parent–infant relationship (the so-called secure type of attachment) has a protective effect. In such a relationship, the mother and child form an inseparable unit, communicate in a warm and harmonious way and understand each other. This gives the child a feeling of being protected and loved. These feelings, coupled with maternal support, help reduce the number of harmful effects on brain development. Children who are exposed to abuse, neglect, insecurity or disorganised relationships with their parents (this includes maternal depression) may experience long-term disturbances of the cortisol-production pattern (the suprarenal gland hormone). As adults, they feel nobody understands them, become “rebels without a cause”, are less successful later in life and more prone to addictions, social pathology and criminal activities. These data may also serve to explain the high frequency of depression and other psychological problems among adults. The modern way of life has brought about significant changes in the lives of young parents: children are separated from them at an earlier age (attending nursery at the age of 6 months) and communication becomes scarcer. Overwhelmed by the challenges of the fast-paced way of life and the struggle to ensure the family’s existence, parents spend less time with their children.