Caring for children at an early age: nursery, babysitter 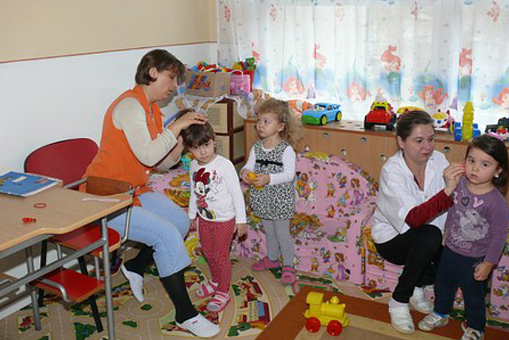 The nursery is a form of organised childcare for infants below the age of three, intended to promote the child’s psychophysical, emotional and social development, and enable the mother to work outside the home. Since this is also the most intensive phase of a child’s growth and development, external factors influence it in a most extraordinary way (whether in a positive or negative sense). This makes nurseries an extremely important child facility which can have a strong (whether positive or negative) influence on the child’s growth and development.

Nowadays, nurseries are undergoing a gradual transformation: what was once a strictly social facility is now becoming a facility aimed at providing proper care, nutrition and upbringing, fighting illnesses and promoting health and upbringing habits related to child care, nutrition and child rearing within the family. This facility provides child care while the mother is at work; however, it is meant to function as a supplement to family care, not a substitute for it.

Despite the increasing health standards and expert work provided in nurseries, there are numerous harmful factors linked to early separation of the child from the parents and the child’s increased exposure to various disease causative agents.

Early separation (between the ages of 6 and 12 months) has a negative effect on the early emotional development of the child, who at this age needs a person who is constantly present and ready to satisfy their needs without hesitation. This fundamental need is part of the development of the so-called secure attachment, a relationship marked by mutual trust, harmony and stability. This type of attachment is usually established with the mother (medical science refers to the person who has developed the aforementioned relationship with the child as the primary caretaker); she is the one who guarantees that the child will be safe and that all the child’s needs are met. From a professional standpoint, it would be ideal for the child to remain with the mother; unfortunately, professional demands placed before young mothers are incompatible with this ideal, so the family seeks help from grandparents or babysitters. In addition to the parents, other people from the child’s environment also create specific relationships with the child in their own individual ways. This is also true of the babysitter. The best indication of a successful connection between the two is the child’s reaction to the babysitter’s arrival (joy, clear signs of acceptance), which should help parents develop trust in the person they do not know very well or have not known for long. While the relationship between the child and the babysitter is being established, parental presence is highly recommended. Expressions of love and affection indicate a bond between the babysitter and the child. Another positive indication is the absence of nervous episodes or intolerance which may temporarily appear in stressful situations.

Belonging to child groups at an early age is inevitably linked to increased exposure to numerous disease causative agents. Most common among these are viruses that cause respiratory tract infections. Since the child’s immune system is not yet fully developed, infections are quite frequent (on average, 2 – 3 times a month). Due to their aggressiveness, certain viruses can cause severe types of infections. Naturally, some children contract illnesses only slightly more frequently than they did before joining the group, while the majority contract an average number of infections. However, a small percentage of children (1 – 2%) contract severe, life-threatening infections shortly after joining a child group. These children are not yet ready for the nursery: parents should keep them at home for another 6 to 12 months (at least) and then try again. Children who first attend the nursery at the age of 12 months need about 2 to 3 years to develop immunity and contract illnesses at the same rate as children who do not participate in a child group. This period of “immunity building” is shorter for children who are starting kindergarten (after the age of 3) and lasts on average for 1 to 2 years. Young children who are still at home, but whose older siblings belong to child groups, are exposed to the same disease causative agents at home. Once they start kindergarten, the “immunity building” period will last for a shorter time since much of the “work” has already been “done” at home.

Hand hygiene (regular handwashing for both children and caretakers), disinfection of toys and play and eating areas is equally important for both nursery and stay-at-home children. It is important to ensure sufficient time for outdoor play and avoid overheated and dry air which facilitates the contraction of respiratory tract inflammations in indoor areas.